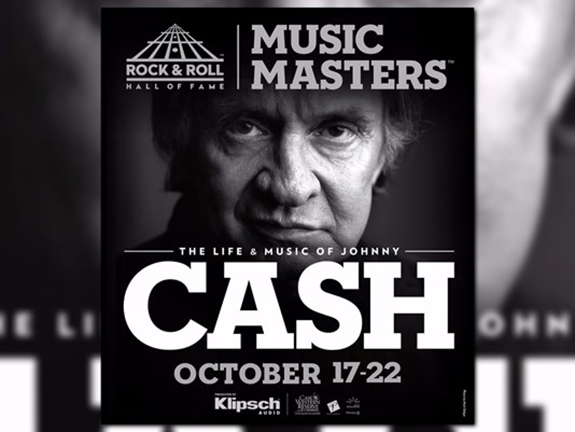 CLEVELAND – The Rock & Roll Hall of Fame, who will be honoring the late Johnny Cash as part of their Music Masters series, has announced additional artists who will be performing in an all-star tribute concert on October 21.

The tribute concert and weeklong series of events pay tribute to Cash’s incredible body of work that has resonated for decades with artists and fans alike. Tribute artists and talent participating in the events throughout the week highlight Cash’s profound impact across generations and genres and showcase his legacy.

An Evening with Rosanne Cash: Wed., Oct. 19 at 7:30 p.m. at the Rock Hall. Four-time GRAMMY Award winner, Rosanne Cash will give a 90-minute exclusive interview and perform several songs. Tickets for this event are SOLD OUT, but the event will stream live on rockhall.com.

Music Masters Tribute Concert: Fri., Oct. 21 at 7:30 p.m. at the State Theatre at PlayhouseSquare in Cleveland, OH. An all-star tribute concert honoring Johnny Cash. Tickets range from $30 – $100 and available now at playhousesquare.org. A limited number of premium seats have just been released. VIP Packages available by contacting the Rock Hall’s Development Department at (216) 515-1201 or [email protected] The concert will stream on klipsch.com.

Johnny Cash Day: Sat., Oct. 22 at the Rock Hall. A day of live music, an exhibit opening, panels, films, and family activities to celebrate the life and music of Johnny Cash. Events are included with Rock Hall admission. Seating is available on a first-come, first-served basis.

About the Annual Music Masters:

The Annual Music Masters series, a co-production of the Rock & Roll Hall of Fame and the Center for Popular Music Studies at Case Western Reserve University, celebrates the lives and careers of artists who changed the shape and sound of rock and roll music. Each year, the Music Masters series explores the legacy of a pioneering rock and roll figure in a range of events that includes Museum exhibits, lectures, films, a major conference and a tribute concert benefiting the Rock Hall’s education programs. Drawing together experts, artists, fans and friends, these events provide new perspectives on the most beloved and influential musicians of the past century. The tribute concert brings together a diverse mix of artists and musical styles, and as a result, many magical moments have taken place over the years. The Ohio Arts Council helps fund this program with state tax dollars to encourage economic growth, educational excellence and cultural enrichment of all Ohioans.

August 10, 2016
Toggle Share
Lyrics + Info Watch Video Save Track
X
Save On Apple Music Save On Deezer Save On Spotify
X
X