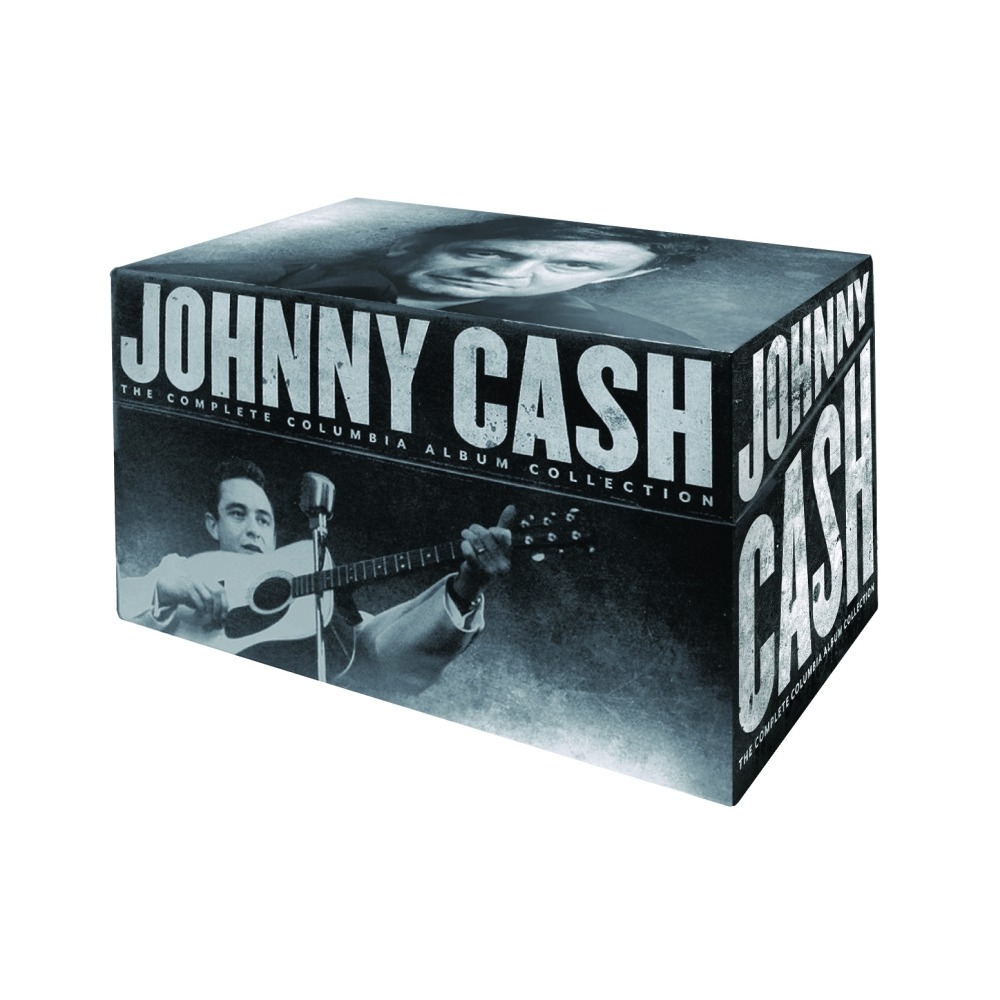 JOHNNY CASH – THE COMPLETE COLUMBIA ALBUM COLLECTION BRINGS TOGETHER 59 ALBUMS ON 63 CDs, FROM 1958’s THE FABULOUS JOHNNY CASH THROUGH 1990’s HIGHWAYMAN 2 WITH WAYLON, WILLIE AND KRISTOFFERSON

Signed to Columbia Records at age 26 in 1958, the arc of Johnny Cash’s career played out at the label over the next three decades, a near lifetime of work in music, film and television now presented on JOHNNY CASH – THE COMPLETE COLUMBIA ALBUM COLLECTION. Containing 61 distinct album packages (single and double CDs, totaling 63 discs overall) housed in a box with a lift-off cover, the deluxe set will be available everywhere December 4th through Columbia/ Legacy, a division of SONY MUSIC ENTERTAINMENT.

Released in the year in which Cash would have turned 80 (born February 26, 1932), JOHNNY CASH – THE COMPLETE COLUMBIA ALBUM COLLECTION is a monumental tribute to the original Man In Black. Working with Columbia producers Don Law (1958-67), Frank Jones (1960-67), Bob Johnston (1968-70), Larry Butler (1972-78), Charlie Bragg (1972-77), Brian Ahern, Billy Sherrill, Chips Moman, and others, Cash was always in command of his direction, whether it was country & western, gospel, blues, rockabilly, traditional balladry and folk, or any other style he chose to pursue. The new box set was compiled by multi-Grammy Award®-nominated producer Gregg Geller and multi-Grammy® and W.C. Handy Award-winning producer Steve Berkowitz, who have supervised Legacy’s historic Johnny Cash reissue program for over a decade.

Willie Nelson, who took part in April’s “We Walk the Line: A Celebration of the Music of Johnny Cash” concert in Austin (available on DVD and Blu-ray from Legacy), had this to say about Cash at the event: “I always looked at John as somebody who had been there before me and who was doing it the way he wanted to do it. I always admired and respected him for doing that − he was one of the first rebels, one of the first outlaws (if you want to call him that) that hit Nashville and I was a great fan of his not only for his music but for his attitude.”

The box set begins with The Fabulous Johnny Cash, his Columbia debut LP recorded and released in 1958, with his first #1 country single at Columbia, “Don’t Take Your Guns To Town.” It wraps up in 1990 (though Cash actually left Columbia in 1983) with Highwayman 2, the second Columbia album by the quartet of Johnny, Waylon Jennings, Willie Nelson, and Kris Kristofferson, featuring the Top 25 country hit, “Silver Stallion.”

The booklet also features liner notes by veteran annotator Rich Kienzle, who references many of the Columbia albums along the way. “When one thinks of Johnny Cash’s recordings, one thing is certain,” Kienzle writes. “The Columbia years loom larger than any other phase. A star when he arrived in 1958, when he departed he was an American icon.”

Complementing the Columbia albums, the producers have assembled two new compilations for this box set:

There are several rarities and Johnny Cash catalog anomalies to be found throughout THE COMPLETE COLUMBIA ALBUM COLLECTION. Chief among these are three live albums (out of the eight live albums in the box set):

Among the other rarities in THE COMPLETE COLUMBIA ALBUM COLLECTION are two original motion picture soundtrack albums, both produced in Nashville in 1970 by Bob Johnston, who also served as Columbia staff producer (at the time) of Bob Dylan, Leonard Cohen, Flatt & Scruggs, The Byrds, and others:

“Johnny Cash and Columbia Records were joined at the hip for 28 years,” Kienzle writes, “or nearly 60 percent of his 48-year recording career that began in early 1955 when he did his first formal session for Sun Records in Memphis, continuing until just before he died in 2003. Cash staked his claim and established himself at Sun; at Columbia, he defined himself for all time.”

August 7 also marked Legacy’s release of We Walk The Line: A Celebration of the Music of Johnny Cash, a DVD+CD set and separate Blu-ray disc. The packages chronicle the all-star tribute concert of April 20, 2012, held at the Moody Theater in Austin, Texas. Artists who performed that night and appear in the feature include Brandi Carlile, Sheryl Crow, Iron & Wine, Shooter Jennings, Kris Kristofferson, Shelby Lynne, Pat Monahan of Train, Willie Nelson, Lucinda Williams, and others.

THE COMPLETE COLUMBIA ALBUM COLLECTION also follows up the critical and commercial success of The Johnny Cash Bootleg Series, which has presented four historic releases to date. Released in April, the most recent title in the series is The Soul Of Truth: Bootleg Vol. IV, which includes 51 gospel-themed recordings.