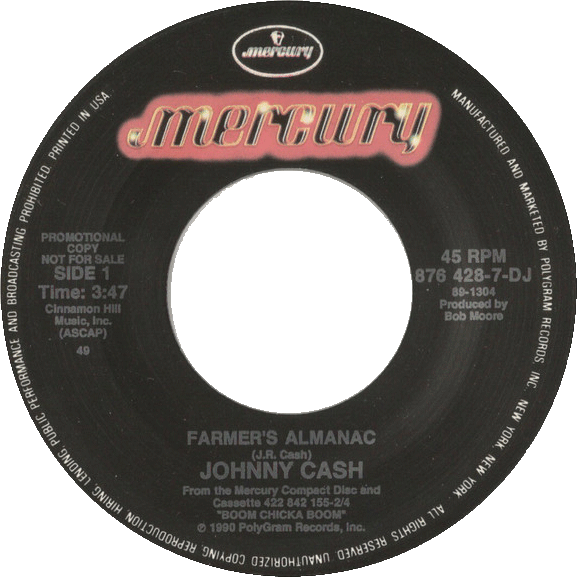 [Verse 1]
Well, the farmer prayed for a better year
And the crops were good, for the Lord did hear
But, his barn burned down with winter near
The Answer came in white and black
In the Farmers’ Almanac, it says
If a man can have half his wishes, he can double his trouble

A sweet old lady was 84
When her kinfolks came for a month, or more
Now, from overwork, she’s on the other shore
Much too late, she said, Now you all come back
And, it says in the Farmers’ Almanac
Visitors, and fish, smell after 3 days

Our leader was a silver tongued man
He deceived the people of the land
And when he got caught
He couldn’t stand
It’s a little of beat, and a little off track
But, it says in the Farmers’ Almanac
In rivers and bad government, the lightest things float to the top

Rod said, I don’t believe in God
Rod died, and now he lays beneath the sod
For God did not believe in Rod
Life is a trouble and a weary track
But, it says in the Farmers’ Almanac
Feed your faith, and your doubts will starve to death

The little boy followed the honey bee
And it went straight to the honey’s tree
He got stung, but got the honey free
Consolation for the things you lack
Is in the Farmers’ Almanac
It also says
God gave us the darkness, so we can see the stars

He came home, three hours late, from work
He said, I had a flat, and I fell in the dirt
She said, Well, you have lipstick on your shirt
Well, it turned out like Jill and Jack
And, it says in the Farmers’ Almanac
Lies have to be covered up, Truth can run around naked

He said, Honey, you know I’m true.
I just look at other women, that’s all I do
Then, she caught him with her best friend, Peggy Sue
Sometimes, some women DO look back
And it says in the Farmers’ Almanac
There is a LOT of difference, between shopping and shoplifting

I sat down at a shoeshine stand
I had a very slow shoe-shine man
I said, You sure don’t pop that rag, like some of them can
He looked at me, and answered right back
It says in the Farmers’ Almanac
The trouble with the world today,
is there is too much ‘popping’ and not enough ‘shining

[Chorus]
When to plant
When to harvest
How you weed, just what you sow
When to look for rain, and who to turn to when it don’t
There was a plan for early frost
Salvation for the lost
Words to live and die by front to back
The family bible and the Farmers’ Almanac