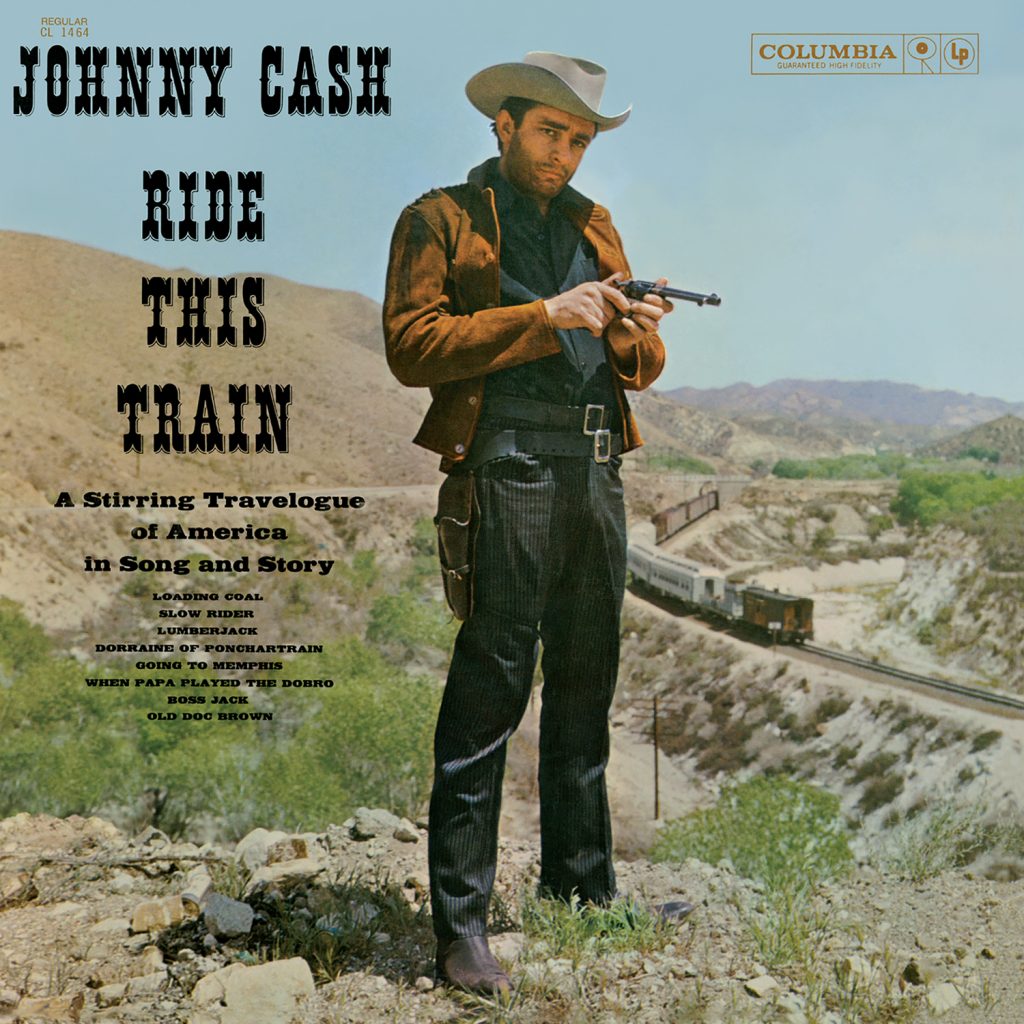 This fascinating program presents Johnny Cash as singer and narrator in an imaginative travelogue across America. Ride This Train is not, as might be supposed, a collection of train songs. It is a provocative tour of the country through narration and song. Through the background runs the haunting sound of the now-vanishing steam locomotives and their whistles, sounds that used to echo through the nights of small towns and across the empty plains. Most of the people this story tells about are vanished now, too, but they have left their mark on America, and Johnny Can sings about them with uncommon artistry and sympathy.

The travelogue begins with a recital of place-names of America, majestic in their artless poetry, and continues with thundering names of the Indian tribes who lived here first. Then Johnny Cash boards the train, stopping first at a small town in the mining country of Kentucky. He presents a brief character sketch of a boy whose father is a miner — when he comes home “nothing is clean but the whites of his eyes” — and whose ambition is follow that calling. Loading Coal tells the story of a miner who never expects to get rich, but still follows the tradition of his family.

The train then moves westward onto the prairies, where we meet the outlaw John Wesley Hardin, whose murderous life is described with candor. Then we meet another Westerner, a saddle tramp who rides an old Paint. His life is nearly spent, he misses his daughters and wife, but he tries to keep on singing (Slow Rider).

Johnny Cash next takes us still farther west, to Oregon, into lumberjack country, and outlines a young man’s first day as a high-climber. Among the lessons he learns is “don’t cut timber on a windy day” (Lumberjack). Then the fabulous engine carries the train south and east, to the swamps and forests of Louisiana, where the Acadians settled in 1788. Johnny Cash presents his own composition, a tragic ballad of Dorraine of Ponchartrain, the black-eyed beauty who was lost in a boat amid the choppy waves of the lake.

Now the train goes northward, up to Mississippi and its levees and the constant fight against flood waters. In this sequence Johnny Cash sings his own version of Going to Memphis, a striking song of the convict work-gangs with a remarkable contrast between the abjection and of its lyrics (“My brother was killed for a deed I did,  but I disremember what”), and its urgent rhythm. Eastward, now, to South Carolina. Here Johnny Cash sketches the delights of going to a country fair in a buckboard, and the pleasure of a child in listening to dance music after the judging events are concluded. The song is Johnny’s own When Papa Played the Dobro, the dobro being an old fashioned metal-stringed instrument, similar to the guitar. Papa didn’t know much about music by real musical standards, but when he played it was worth sitting up for!

Arkansas is the next stop in this remarkable journey, Johnny Cash describes the cotton land, particularly old days of tall cotton, through the eyes of an enlightened slave owner, and sings a work-song about a good boss, Boss Jack, and his kindness to the people who worked for him. Once more the train rumbles across America, stopping at last in Iowa, where the influx of Irish immigrants is noted, with special accent on the interdependence of arrivals in the New World. The story of Old Doc Brown is recited by Johnny Cash, and although the trip is now over, echoes of the American past remain vivid.

Johnny’s brilliant performance in this program is yet another in his steadily growing list of achievements. The writer of the many successful songs, he is also a performing artist of unusual accomplishment. The range and depth of his work may be heard in Songs of Our Soil (CL 1339/CS 8148), Hymns by Johnny Cash (CL 1284/ CS 8125), the recent tribute to other famous country stars, Now, There Was a Song! (CL 1463/CS 8254) and the aptly-named The Fabulous Johnny Cash (CL 1253/CS 8122). 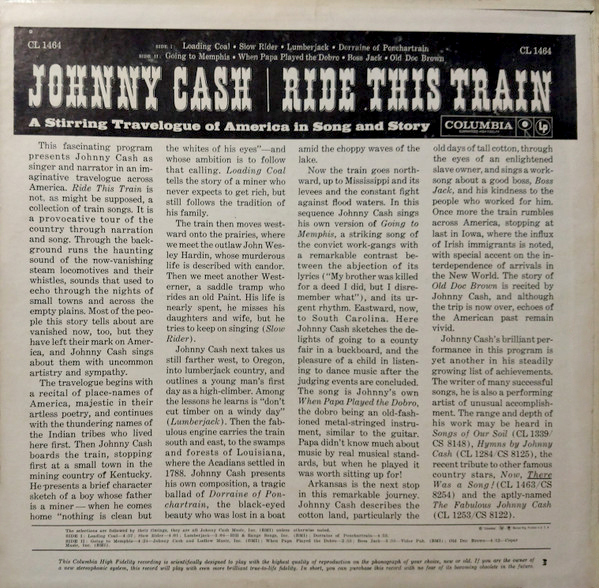