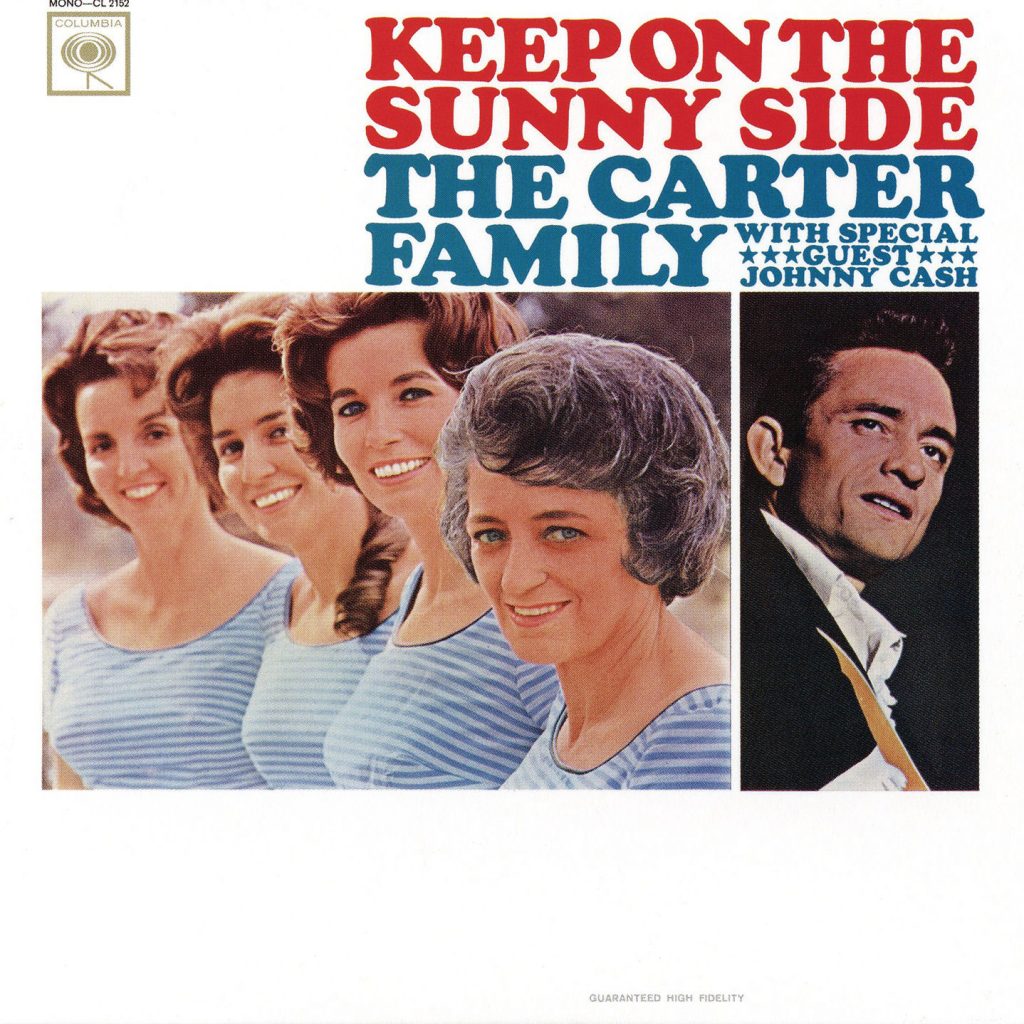 “I know where there’s a whole bunch of huckleberries,” said June, second daughter of E.J. and Maybelle Carter.

Continuing her tale reminiscing about the old S.W. Virginia homeplace, she said, “You turn at Gate City, and go past Uncle “Doc’s” house (that’s Uncle A.P. Carter) then up there on the left is Grandma’s house. That’s the one Mama and Daddy moved to when they first got married in 1926. Well, up in the front of the house there’s a little “Nob,” and there’s just a whole bunch of huckleberries ripe this time of year.”

That was in November, 1963, and we were in Korea for the State Department to entertain U.S. Forces in the Far East.

Six months ago I turned right at Gate City, drove past “Uncle Doc’s” house, “Sweet Ferns,” “Grandma’s House” right along the foot of Clinch Mountain with the beautiful Holston River to my right.

Then, there on the left was the stately, sturdy “Clinch Mountain” home of E.J. and Maybelle Carter, Helen, June and Anita, a place that thousands such as I had stopped by to admire.

It was early morning and I was on the sunny side of the Blue Clinch Mountain. I could smell the Canadian hemlocks, the boxwoods in front and the pines all around.

“Uncle Grant” lives there now, and as is the custom, and a custom which I knew in my own old homeplace, I “just must wait and have something to eat.” I was joined by many of the Carter Clan including A.P. Carter’s daughters, Jeanette and Gladys, Cousin Fern, then later Uncle Ermine and family, Uncle Roy and Aunt Virgie (sister of E.J) and many, many more wonderful people, who seem to always live on the sunny side, know that life is tougher, faster and not so peaceful as in Poor Valley.

After an hour of country ham, homemade biscuits and gravy, and promising I’d come back again, I drove slowly on in the direction of Arlington, Virginia.

I think I knew exactly where to turn long before I got to the narrow, rutted side road that leads to Poor Valley’s Mount Vernon Church and Cemetery. It sits on the flat top of a stark, steep “nob” where the pines seem to grow a little taller on the slopes.

The road was steep and winding, but short. All of a sudden you’re out in the open in the sunlight beside the tall, old fashioned, clean and solid Mount Vernon Church, where the Carters walked to church thirty years ago.

I walked then through the cemetery, and though I had never been here, I somehow had that “knowing” feeling, that the grave I wanted to visit most was father to the other end, where the pines on each side seemed to lean back a little to let the sun through for a longer time each day.

Passing markers bearing names such as “Bayes,” “Harper,” “Addington,” “Carter,” I found myself standing at the back of a beautiful marble monument wider and taller, but not all that much bigger than the rest.

Having never heard a description of his monument nor a mention of it, I walked around and read “A.P. Carter” no date, no flowering verse, but just under that name was imbedded a gold record, which stated A.P. Carter’s appropriate words simply and boldly, “Keep on the Sunny Side.”

Here in this album are songs that he sang so many, many times with Maybelle and Sarah. I wouldn’t call these girls on this album the New or the Old Carter Family.

Here is Maybelle with her three daughters, Helen, June and Anita, who have sung these songs all their lives.

I’ll just say that here is the “Carter” brand of song and singing as only they can do it.

I am honored that they asked me to sing along with them on some of these songs. I did not try to sound like A.P. Carter. Good singers have tried that for over thirty-five years, and I’m not even that old, or a good singer. But I was proud as a possum in the huckleberry patch to join in the sunshine that you will feel them project here.

Here and there is a classic song of sadness but they bounce right back- ON THE SUNNY SIDE. 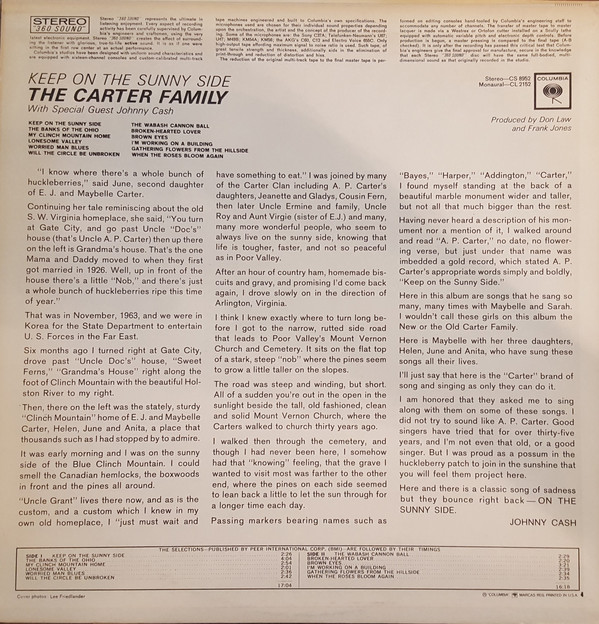 ‘Keep On The Sunny Side’ Album Back Cover Sleeve