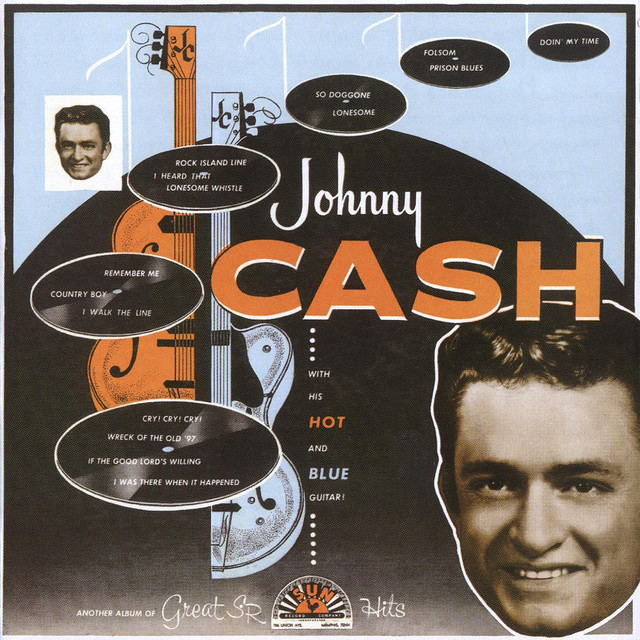 Johnny Cash’s debut album, With His Hot And Blue Guitar, was the first-ever full-length LP to be released by Sun Records. From the liner notes:

Johnny Cash and his music are one — blending to produce the kind of songs that bridge the gap from heart to heart. As Johnny says, “There are three things you can’t get away from. Loneliness, that certain kind of woman, and God.” And so the songs in this album echo the sincerity of Johnny’s words and the universal truth of his experience.

When it comes to loneliness, you’d think Johnny invented the word. Naturally endowed with a rangy, big, hollow voice, Johnny’s melancholy mood comes through strong on such blue ballads as his composition, “So Doggone Lonesome” or the old railroad folk song, “I Heard That Lonesome Whistle.”

If there’s an answer to man’s loneliness, it’s Woman. A woman can change a man’s life completely. This is what Johnny says — a bit teasingly — in “I Walk the Line” (another Cash tune). This record, on single release, hit the top in the country and western field and also made “Top 20 in the Nation” in the pop field. Of course, you have to take the bitter with the sweet — hence, “Cry, Cry, Cry.”

Coming to the third inescapable element, Johnny in this album sings one song of a spiritual nature. There’s religious conviction in the strong, sensitive voice of Johnny Cash when he sings “I Was There When It Happened.” Those who know him say that Johnny’s religion to him is a very real thing, source of the peace he sings of so knowingly.

How does a young man of 23 get to be so serious, so soon? In Johnny’s case, it was a matter of facing hard, cold faces from childhood. Brought up on a 40-acre cotton farm at Dyess Colony, Ark., Johnny was one of six children. The Cash family, though of necessity hard-working, always had time to sing together, and it was at home Johnny acquired his love of music.

At 18, Johnny enlisted in the U.S. Air Force. It was while serving “three long, miserable years” in Germany that he bought a guitar and taught himself to play. It went a long way in combatting blues and boredom, and to Johnny it was fun to work out original melodies now and then.

Service life completed, Johnny enrolled in a Memphis radio school, determined to become an announcer. On an impulse, he went into Sun Records Company one day and rather shyly asked Sun Records President Sam Phillips to audition him.

That was perhaps the most fateful day in Johnny’s life, because he was immediately signed by Sun and his musical career was launched. That was in late ’55, and one year later, Johnny was named the most promising country and western artist of the year in four separate polls.

Johnny writes nearly all his songs “when I’m on the road, feeling homesick…. When an idea comes into my head, I jot it down. Later, at home, I fish out maybe 40 or 50 scraps of paper and see what I’ve got.”

To hear Johnny Cash Album is to know Johnny Cash — the man, the lonely dreamer with a stubborn streak of realism which makes for strong and unforgettable conversation in song.