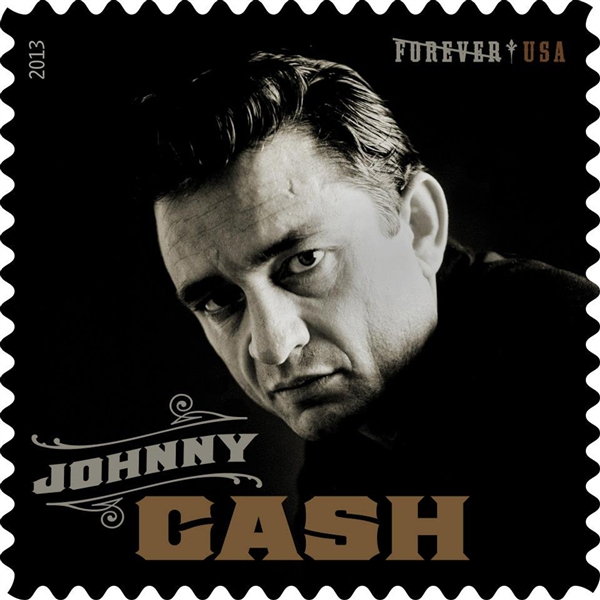 “With his gravelly baritone and spare percussive guitar, Johnny Cash had a distinctive musical sound — a blend of country, rock ‘n’ roll and folk — that he used to explore issues that many other popular musicians of his generation wouldn’t touch,” said U.S. Postal Service Board of Governors member Dennis Toner. “His songs tackled sin and redemption, good and evil, selfishness, loneliness, temptation, love, loss and death. And Johnny explored these themes with a stark realism that was very different from other popular music of that time.”

“It is an amazing blessing that my father, Johnny Cash be honored with this stamp. Dad was a hardworking man, a man of dignity. As much as anything else he was a proud American, always supporting his family, fans and country. I can think of no better way to pay due respect to his legacy than through the release of this stamp,” said singer-songwriter, producer John Carter Cash, Johnny Cash’s son.
“My family is thrilled that my father will grace a Postal Service Forever Stamp, a great honor for any American, and an honor that would have particularly delighted him. It is a joy to know that generations will use this stamp, and my father will forever be where he loved to be: traveling the world,” added singer-songwriter and author Rosanne Cash, the music icon’s eldest daughter.

Customers may purchase the Johnny Cash Forever stamp at usps.com/stamps, at 800-STAMP-24 (800-782-6724) and at Post Offices nationwide. The Music Icons series, launched May 15, 2013, with the Lydia Mendoza Forever stamp, also will honor Ray Charles with a Forever stamp later this fall. The series will continue for the next several years with inductees being announced at a later date.

The Man in Black

Johnny Cash (1932–2003) was a music visionary best remembered internationally as a country music artist, though his influence can be felt in many genres — from rock and folk to blues and gospel.

Born into a poor farming family, grew up in rural Arkansas, a region that struggled under the weight of the Depression and natural disasters. The culture of that era remained with him throughout his life. Three touchstones left an especially rich legacy — the Bible, gospel and country music. Cash began to find his own voice among them after leaving home in 1950 to serve in the U.S. Air Force.

Stationed in Germany, half a world away from everyone and everything he knew, Cash turned to music for solace. During breaks he pulled out his guitar and began to write his own songs. What emerged was a voice unlike any heard before: deep, quavering, and inflected with the legacy of a hardscrabble beginning.

“Folsom Prison Blues” was one of the first songs Cash recorded after returning home from military service in 1954. He landed a job as a salesman in Memphis,TN, but dreams of making music loomed large. In early 1955, he visited Sam Phillips at Sun Records in Memphis, the same studio where Elvis Presley had just recorded his first singles. Although Cash and his friends — Luther Perkins on electric guitar and Marshall Grant on bass — had limited musical ability, the boom-chicka-boom sound of their music proved infectious. They recorded several songs at those first sessions, including “Cry, Cry, Cry.” Released as a single in June 1955, “Cry, Cry, Cry” rode the country chart for a few days in November 1955, while “Folsom Prison Blues” cracked the country music top ten in 1956.

Cash’s 1956 debut on the “Grand Ole Opry,” the long-running radio show broadcast out of Nashville, TN, helped broaden his audience. He performed “I Walk the Line,” an iconic song about fidelity in the face of grand temptations that became his first number one country hit. He returned to the program many times in the 1950s and also began to make television appearances. By the mid-1960s, Cash had performed at Carnegie Hall in New York City and become one of the top names in country music.

Cash found inspiration for his music in the nation’s history, in the stories of outlaws and laborers, and in his own life experience. His songs about Depression-era America, especially the rural landscape of his childhood, made him unique among the popular artists of the day. Themes of redemption, loneliness, love, loss, and death colored his music with a gritty realism that differed markedly from other socially conscious popular music.

Many of this year’s other stamps may be viewed on Facebook at facebook.com/USPSStamps, via Twitter @USPSstamps or at beyondtheperf.com/2013-preview.

Customers have 60 days to obtain the first-day-of-issue postmark by mail. They may purchase stamps at a local Post Office, The Postal Store at usps.com/stamps, or by calling 800-STAMP-24. Customers should affix the stamps to envelopes of their choice, address the envelopes to themselves or others and place them in larger envelopes addressed to:

After applying the first-day-of-issue postmark, the Postal Service will return the envelopes through the mail. While the first 50 postmarks are free, there is a 5-cent charge per postmark beyond that. All orders must be postmarked by Aug. 5, 2013.

The Postal Service also offers first-day covers for new stamp issues and Postal Service stationery items postmarked with the official first-day-of-issue cancellation. Each item has an individual catalog number and is offered in the quarterly USA Philatelic catalog, online at usps.com/stamps or by calling 800-782-6724. Customers may request a free catalog by calling 800-782-6724 or writing to:

There are 10 philatelic products available for this stamp:

A self-supporting government enterprise, the U.S. Postal Service is the only delivery service that reaches every address in the nation: 152 million residences, businesses and Post Office Boxes. The Postal Service receives no tax dollars for operating expenses and relies on the sale of postage, products and services to fund its operations. With more than 31,000 retail locations and the most frequently visited website in the federal government, usps.com, the Postal Service has annual revenue of more than $65 billion and delivers nearly 40 percent of the world’s mail. If it were a private-sector company, the U.S. Postal Service would rank 42nd in the 2012 Fortune 500. The Postal Service has been named the Most Trusted Government Agency for seven years and the fourth Most Trusted Business in the nation by the Ponemon Institute.