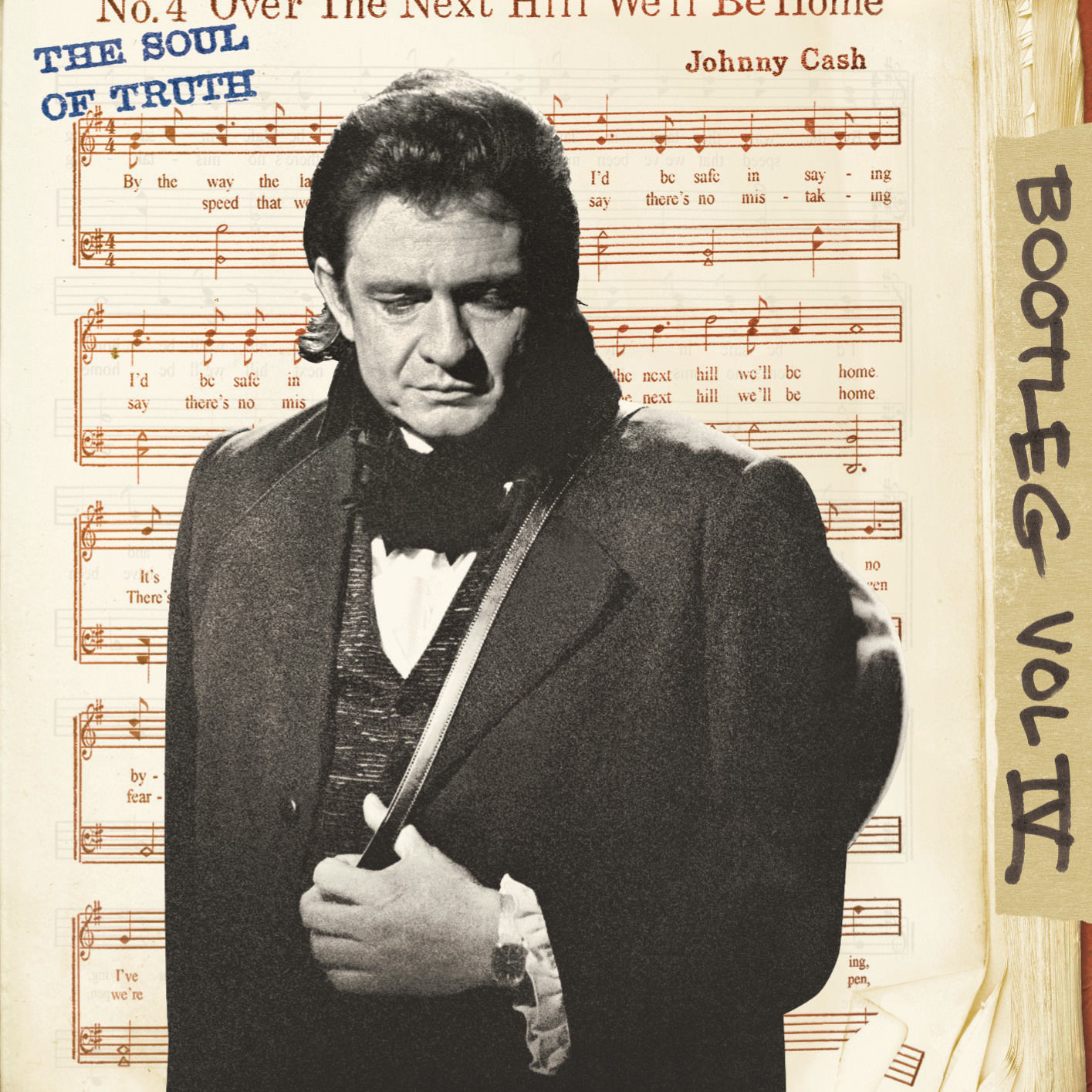 JOHNNY CASH – BOOTLEG VOL. IV : THE SOUL OF TRUTH FOCUSES ON SONGS OF FAITH RECORDED IN THE 1970s AND ’80s

INCLUDES THE ENTIRE 20-SONG A BELIEVER SINGS THE TRUTH, PLUS:

International superstar Johnny Cash would have turned 80 years old on February 26, 2012. Legacy Recordings is set to celebrate this landmark year with a full slate of projects to be announced in the coming weeks.

First up is BOOTLEG VOL. IV: THE SOUL OF TRUTH, a 2-CD, 51-track collection which compiles gospel and spiritual recordings (both released and previously unreleased) made by Cash in the 1970s and ’80s. The tracks are traditional hymns and folk songs, as well as original composi­tions by Cash and many other songwriters. These recordings date from a period when his life was finally on an even keel, evidenced by “His excitement for his faith,” as the liner notes written by his son, John Carter Cash, bear witness.

BOOTLEG VOL. IV: THE SOUL OF TRUTH will be available at all physical and digital retail outlets starting April 3rd through Columbia/Legacy, a division of SONY MUSIC ENTERTAINMENT.

The bountiful album catalog of Johnny Cash on Columbia Records, for whom he recorded from 1958 to ’83, is blessed with many albums of faith, from 1959’s classic Hymns By Johnny Cash and 1962’s Hymns From the Heart, to his much-lauded concept album projects of 1968 (The Holy Land) and 1973 (The Gospel Road), and more. The chronology moves ahead a few years for BOOTLEG VOL. IV, which features tracks that were cut both at Columbia Studios in Nashville, as well as his own House Of Cash in Hendersonville, Tennessee.

The recordings were made during his Columbia tenure, though not necessarily released on Columbia at the time. For example, as compilation producer Gregg Geller explains, “The centerpiece of BOOTLEG VOL. IV is the first 20 songs on Disc One, which comprised the album A Believer Sings The Truth, originally recorded for the small Cachet Records label in 1979, half of which were reissued in 1982 on CBS’s boutique gospel label, Priority Records – neither the original nor the reissue were widely distributed. Of the remaining five 1979 recordings on Disc One, four appeared briefly on the album I Believe…, released by Arrival Records in 1984; the fifth is the aforementioned ‘Truth’.”

The latter is a reference (Geller explains) to a previously unreleased song based on a poem that was believed to have been written by Muhammad Ali and presented to Cash, who recorded but never released the track. The poem turned out to be written by the Sufi leader Hazrat Inayat Khan, and one of its lines gives this collection its title: “The soul of truth is God.”

The seemingly convoluted release history of the tracks on BOOTLEG VOL. IV is part of the allure of the series to Cash-philes around the world. Disc two begins with 12 tracks recorded in 1975, intended for an LP that never received a title and was never released.(Although two of its tracks have shown up on compilations issued over the past five years.) Disc two then proceeds to 10 tracks that comprised a rare LP prized by Cash collectors, Johnny Cash-Gospel Singer, recorded in 1983 for the CBS gospel label, Priority Records. The final four tracks are previously unreleased outtakes from those same sessions.

Once the track genealogy is sorted out, the music is revealed for what it is – the gospel and spiritual foundation of Johnny Cash’s life. As John Carter’s evocative 1,500-word liner notes essay points out, gospel music was an integral part of his father’s life from earliest childhood. Whether the family was out working the fields of their Dyess, Arkansas farm, or listening to the Sears-Roebuck Silvertone radio late on a Friday or Saturday night, or singing together on Sunday morning at the Dyess Central Baptist Church, gospel music was the be-all and end-all.

“The music set a foundation for J. R. Cash,” John Carter writes, “and upon it he established the motivation for his existence. With the songs of the gospel came faith, and along with faith, a fortitude and persistence that would not be denied. If you were convinced of my Dad’s honesty, it is because he was confident of his purpose, and that purpose was defined by gospel music. Though he would sing many kinds of music in his life, he was never truer than when he sang songs of faith.”

Through the highs and lows of his career on records, both at Sun and Columbia, Johnny Cash kept his gospel roots up front in the spotlight. Friends and family would join in the testimony, demonstrated throughout BOOTLEG VOL. IV, as he is joined by June Carter Cash (“He’s Alive,” Sister Rosetta Tharpe’s “This Train Is Bound For Glory,” “Far Side Banks Of Jordan”), Rosanne Cash (“When He Comes”), Cindy Cash (“Lay Me Down In Dixie”), Anita Carter (“Over The Next Hill (We’ll Be Home)”), Helen Carter (on the Carter Family’s “Way Worn Traveler”), Rodney Crowell (“You’ll Get Yours And I’ll Get Mine,” the Gaither Family’s “He Touched Me”), Jessi Colter (“The Old Rugged Cross”), and many others on this collection.

“At the very heart of this faith was gospel music,” John Carter’s notes conclude. “I invite you to join me, and get to know the man John R. Cash as I remember him. You will hear him in these treasured recordings. Listen carefully: Spirit, Faith, Gospel. The very source of his vision.”

The Johnny Cash Bootleg Series has been developed by Grammy Award®-nominated producer Gregg Geller, and Grammy® and W.C. Handy multi-award winning musician/producer Steve Berkowitz. The House Of Cash archive in Hendersonville, Tennessee bore first fruit on Columbia/Legacy in May 2006, with the release of Personal File aka Bootleg Vol. 1, a fascinating double-CD collection of 49 privately recorded, intimate solo performances dating from 1973 to 1982.

Four years later in May 2010, Bootleg Vol. 2: From Memphis To Hollywood continued the series. This time the focus was on the dawning of Cash’s recording career at Sun Records in Memphis from late 1954 to late ’57 (on CD One), into his first decade at Columbia Records in Nashville, from 1958 to 1969 (on CD Two), when he began to find work in the world of film and television.

In 2011, Bootleg Vol. 3: Live Around The World picked up the thread over the course of ten live performance settings. Highlights included the 1964 Newport Folk Festival, a 1969 USO tour appearance in Vietnam, a 1970 White House performance at President Nixon’s invitation, a 1972 show at Osteraker Prison in Sweden, the 1973 CBS Records Convention in Nashville, and more.

The release of Bootleg Vol. 3 coincided with the publication of an important new book, House Of Cash: The Life, Legacy and Archives of The Man In Black (Insight Editions) written by John Carter Cash. An affectionate and affecting look into the Johnny Cash legend, House Of Cash is a memoir, biography and deeply personal remembrance of the man beneath the black. The lavishly illustrated book features many color and black and white photos, as well as numerous keepsake facsimile documents from the Cash family archive.

Disc One produced by Jack Clement and Jack Routh.