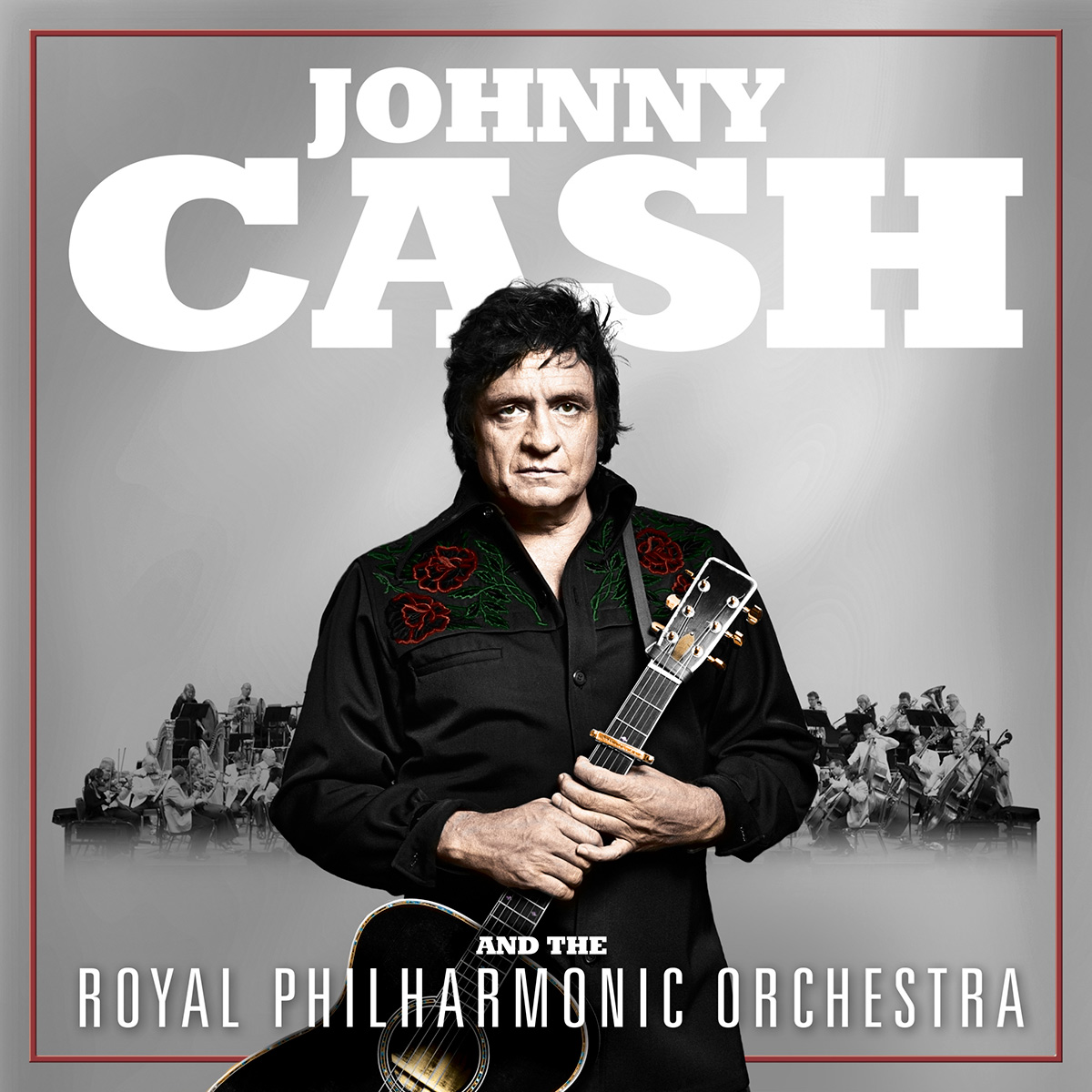 Available in digital, 1CD and 1LP configurations, Johnny Cash and The Royal Philharmonic Orchestra is available for pre-order now: https://JohnnyCash.lnk.to/RPO

Watch a video trailer for Johnny Cash and The Royal Philharmonic Orchestra: https://JohnnyCash.lnk.to/RPOTrailer

Produced by Nick Patrick and Don Reedman and recorded at the fabled Abbey Road Studio 2, Johnny Cash and The Royal Philharmonic Orchestra is the latest in a series of RPO albums showcasing classic recordings by timeless artists in sublime new musical settings.

Producers Reedman and Patrick consulted with John Carter Cash, who serves as Executive Producer, in making the career-spanning selection of 12 Johnny Cash master recordings centering the album. Performances range from archetypal Cash classics like “Man In Black” and “Ring Of Fire” to essential musical collaborations including “Girl From The North Country” (Bob Dylan with Johnny Cash), “The Loving Gift” (with June Carter Cash) and “Highwayman” (with Willie Nelson, Waylon Jennings, Kris Kristofferson and Johnny Cash).

Penned–and first recorded in 1977–by American singer-songwriter Jimmy Webb, “Highwayman” became the title track for a 1979 Glen Campbell album and the inspiration behind The Highwaymen, an outlaw country supergroup (formed in 1984) featuring Johnny Cash, Willie Nelson, Waylon Jennings and Kris Kristofferson. In 1985, Highwayman, the group’s platinum-selling debut album hit #1 on the Billboard Top Country Albums chart while their definitive version of “Highwayman” spent 20 weeks at #1 on the Billboard Hot Country Songs chart while earning Webb a Grammy Award for Best Country Song in 1986. “I love that original recording (by the Highwaymen),” says Jimmy Webb, “but as an arranger myself, I often wondered what it might sound like if Johnny Cash and his three bandmates had an orchestra and lush strings behind them. The fearless and precise Don Reedman put an end to my wondering: They sound spectacular with The Royal Philharmonic Orchestra behind them. The production is exquisite and provides yet another life for this song that still goes ’round and ’round.”

The track “Farther Along” captures the rapturous sound of guitar legend Duane Eddy living his fantasy of playing in Johnny Cash’s band as he blends his signature twang into a new arrangement of a deep JC catalog gem. “I always dreamed of playing with John, because of Luther Perkins,” says Eddy, acknowledging one of the architects of rockabilly; a key member of JC’s band from 1954 until his death in 1968, Luther Perkins is credited with inventing Cash’s “boom-chicka-boom” rhythmic trademark. “Luther and I lived in the same neighborhood, musically speaking (on the bass strings of the guitar), though somehow we managed to have our own sound and style,” Eddy continues. “When Luther passed, I thought of calling Johnny and asking for a job to fill in for Luther. But then I decided I was being a bit too presumptuous. So I didn’t do it. So thanks to Don and John Carter, I was able to realize my dream after all.”

The recordings of “I Walk The Line” and “Flesh and Blood” used in making Johnny Cash and The Royal Philharmonic Orchestra are both previously unreleased alternate takes from Johnny Cash’s soundtrack sessions for “I Walk The Line,” a 1970 film starring Gregory Peck and Tuesday Weld.

“I believe we have captured the emotion, sensitivity and genuine honesty of Johnny Cash through his story telling and his touching and captivating vocal performances,” says Don Reedman in his notes for Johnny Cash and The Royal Philharmonic Orchestra. “With his unique drama, warmth and tone, the bass baritone voice of this iconic artist Johnny Cash, blends beautifully with the stunning understated symphonic arrangements by the uniquely talented arranger Robin A. Smith and The Royal Philharmonic Orchestra….. Making this album with my co-producer Nick Patrick has been a true labour of love, and I believe we have captured the complete spirit and musical message that makes Johnny Cash such a heart-touching and loved artist, whom we are so honoured to serve in our way. Johnny Cash was a man of many emotions and the depth in the songs he sang and the message in those songs strikes a chord in all our hearts.”

Nick Patrick adds, “All these things make up an extraordinary artist. An artist who told the truth, no matter what the consequences. An artist who spoke for the man in the street, who spoke for those with no voice.  An artist whose faith spoke through his music. To have the opportunity to work on this album, on some of the most iconic recordings made has been beyond incredible. To feel so close to the voice is to somehow feel closer to the artist. It has been a truly amazing experience. When we were sitting and listening to songs to be considered on this record we realized what a rich body of work we had to draw on….. Making this album has been a life affirming experience, one I will never forget. We thank from the bottom of our hearts the Cash Family for entrusting us with it.”

“My father, Johnny Cash, was in some ways an orchestra unto himself. His deep rich timbre lent to the rich resonance of French horns and cello. His depth of tone and perfect pitch inspired as deeply as a masterfully conducted symphony,” writes John Carter Cash in his liner notes for the album. “But if he were here today and chose to seek an orchestra to support him as the backdrop for the canvas, The Royal Philharmonic Orchestra would be his choice…. I remember when my father introduced me to the RPO. I was around ten years old and he and I went to see three films from the James Bond saga at a festival in New York. When the theme for Goldfinger began, he leaned over to me. ‘That’s the finest orchestra in the world, son, he said. ‘That’s the Royal Philharmonic.’…. He knew the music of the RPO. He respected them all throughout his life…. I know my father would be enormously excited to see this new album become a reality. I am beyond proud to introduce this masterwork, the essential work of Johnny Cash with the orchestra that he revered and appreciated above all else.”

During his career, Johnny Cash–who’d traced his surname to 11th century King Malcolm IV of Scotland and Fife–held a longstanding fondness for the UK and, especially, Ireland, where he performed 12 shows in 10 days in 1963. Cash’s love for the Irish folk tradition may be heard in his interpretation of “Galway Bay,” included on Johnny Cash and The Royal Philharmonic Orchestra, and other songs in his repertoire. Johnny’s 1963 visit to Ireland–his first–was chronicled in the RTÉ “Documentary On One, Johnny Cash’s Lost Tour of Ireland.” A previously unavailable concert, Johnny Cash – Live in Ireland 1993 (featuring June Carter Cash, John Carter Cash, The Carter Family, Kris Kristofferson and Irish singer Sandy Kelly) was released on DVD in 2006.

3. Girl From The North Country (Bob Dylan with Johnny Cash)

4. I Came To Believe