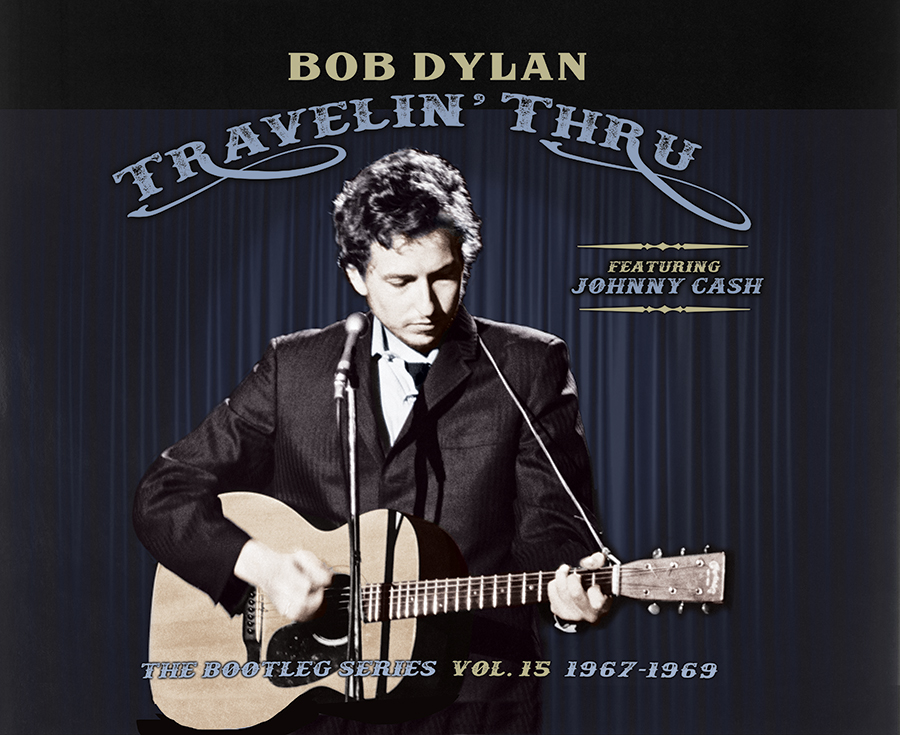 The latest chapter in Columbia/Legacy’s highly acclaimed Bob Dylan Bootleg Series revisits Dylan’s pivotal musical journeys to Nashville, from 1967 to 1969, focusing on previously unavailable recordings made with Johnny Cash and unreleased tracks from the John Wesley Harding, Nashville Skyline, and Self Portrait sessions.

Disc One of Travelin’ Thru, 1967 – 1969: The Bootleg Series Vol. 15 finds Dylan in Columbia’s Studio A in Nashville recording alternate versions of compositions written for John Wesley Harding (October 17 and November 6, 1967) and Nashville Skyline (February 13-14, 1969) while introducing a new song “Western Road” (a Nashville Skyline outtake).

Discs Two and Three of Travelin’ Thru are centered around Dylan’s collaborations with American music icon Johnny Cash including the much sought-after Columbia Studio A sessions and on-stage performances at the Ryman Auditorium (May 1, 1969) for the recording of the premiere episode of The Johnny Cash Show (originally broadcast on ABC-TV on June 7, 1969).

1967 saw a profound and surprising transformation in Bob Dylan’s musical evolution. With contemporary pop culture becoming increasingly baroque, surreal and psychedelic in the wake of Dylan’s 1965-66 cutting edge trilogy, Bringing It All Back Home/Highway 61 Revisited/Blonde On Blonde, the artist withdrew from public view following a motorcycle accident in July 1966. He’d recorded Blonde On Blonde with a full-band in Nashville in February 1966 but, when it came time to record its follow-up in the fall of 1967, he opted for a simple trio–Dylan (guitar, vocals, harmonica), Charlie McCoy (bass) and Kenneth Buttrey (drums)–to create a sublime minimal sound.

In his liner notes for Travelin’ Thru, Colin Escott writes, “Talking to journalist Matt Damsker about the sound of John Wesley Harding, Dylan said, ‘I didn’t know how to record the way other people were recording, and I didn’t want to… I just didn’t think all that production was necessary.’ He also went for lyrical economy. ‘What I’m trying to do now is not use too many words,’ he said. ‘There’s no line you can stick your finger through. There’s no blank filler.'”

Dylan returned to Columbia Studio A in February 1969 to work on Nashville Skyline.

“Bob asked me to be a guest on the album,” Johnny Cash said later, “and I went to the studio and they just turned on the recorder for about two hours.” Columbia Studio A hosted two Dylan-Cash sessions: February 17 and 18, 1969 with a band that included rock ‘n’ roll pioneer Carl Perkins playing guitar on six tracks (including his own composition, “Matchbox”). One of the more intriguing sonic discoveries on Travelin’ Thru is “Don’t Think Twice, It’s Alright/Understand Your Man,” as two singular singer/songwriters pay mutual compositional and vocal tribute to each other.

The full-day Dylan-Cash duet session included the first known version of “Wanted Man” and the only version of the song ever sung by Dylan. The following week, Cash made it the opening song at his San Quentin concert. The session provides insight into the shared sensibilities of Dylan and Cash through a variety of covers including two Jimmie Rodgers medleys.

When The Johnny Cash Show was scheduled to debut in June 1969, the host offered Bob Dylan a guest slot on the first show. In the days before and after The Johnny Cash Show taping, Dylan was working on the album that emerged more than a year later as Self Portrait. For the May 3 Self Portrait session, guitarist Fred Carter was brought in to augment Dylan’s usual Nashville band. The “Folsom Prison Blues” and “Ring of Fire” recorded that day are available for the first time on Travelin’ Thru.

Although only one duet with Johnny Cash (“Girl from the North Country”) appears on Dylan’s original Nashville Skyline album, Cash penned the album’s Grammy Award-winning liner notes. A month after Nashville Skyline was released, Dylan made his first live TV appearance in five years on The Johnny Cash Show; that performance is also included here.

03. All Along the Watchtower – Take 3 (Alternate Version)

Previously released on The Bootleg Series, Vol. 10: Another Self Portrait

This Train Is Bound for Glory written by Woody Guthrie

12. Girl from the North Country – Rehearsal

Based on Blue Yodel No. 1 (T for Texas), The Brakeman’s Blues (Yodeling the Blues Away), and Blue Yodel No. 5 (It’s Raining Here) written by Jimmie Rodgers

Based on Waiting for a Train, The Brakeman’s Blues (Yodeling the Blues Away), and Blue Yodel No. 1 (T For Texas) written by Jimmie Rodgers

Live on The Johnny Cash Show

09. Girl from the North Country

The Home of Thomas B. Allen, Carmel, New York

Included in 1971 documentary Earl Scruggs: His Family and Friends

All songs written by Bob Dylan except where noted

All tracks previously unreleased except where noted